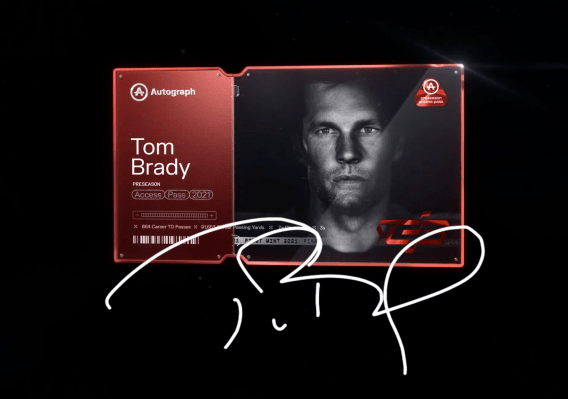 Autograph , an NFT agency co-founded by athlete Tom Brady with a particularly deep bench of star power, has banked new funding from crypto investors who hope the platform can bring a new generation of celebrities and their fans into the fold of crypto collectibles.

Autograph is essentially an agency go-between for celebrity athletes and entertainers looking to find a personal presence in the incredibly noisy NFT world.

While fellow NFT unicorn Dapper Labs has inked partnerships with a handful overarching American sports league players associations including the NFL Players Association and the NBA’s Player Association, Autograph seems to be more focused on the individual athletes and the cult of personality built around them outside the context of the teams they play on or leagues they are part of.

Autograph has a handful of early partners largely in the sports world, but the names represent some of the most famous athletes in their respective sports including Brady, Tiger Woods, Simone Biles, Derek Jeter, Naomi Osaka, Usain Bolt, Wayne Gretzky and Tony Hawk.

Outside the sports world, Autograph has done drops with The Weeknd, Slam Magazine and officially-licensed NFTs for the horror series Saw