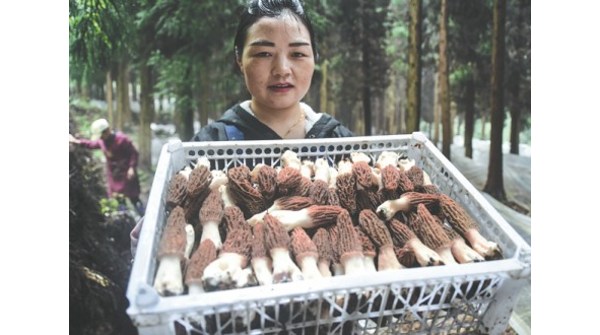 As a key edible fungus demonstration zone in Guizhou province, Baiyun district in Guiyang city is integrating the industry with modern technologies and boosting the high-quality development of the entire industrial chain through a series of initiatives, said local officials.

Edible fungus is one of Guizhou's 12 major characteristic agricultural industries.

The edible fungus in Baiyun is equipped with a full chain tracking management model from the production, cultivation, processing and certification to testing phases.

Liao Yiren, manager of Intelligent Fungus Cloud, an online platform for the entire industry chain of edible fungi, said based on cutting-edge technologies such as big data, the internet of things and artificial intelligence, the platform focuses on areas of production, planting, processing, supply and marketing, certification and testing.

It has established the first intelligent base for rare edible fungi in Baiyun, which not only improves the standardization and automation of edible fungi production, but also the utilization rate of agricultural resources as well as easing the shortage of land resources.

Zou Liqin, 49, a local villager in Asuo village working at the edible fungus base, said she is thankful for the job.

Guizhou Zhongke Yinong Technology is another edible fungus processing enterprise in this area.

Based on the base pre-harvest period and pre-production data provided by the platform, combining with the actual situation of the edible fungus entering the processing plant to its storage, we reasonably arrange the processing time and processing quantity, and implement planned processing," said Zhang Ke, chairman of the company.

In the Guizhou Mushroom Museum, visitors can understand all the information about the entire industrial chain process of the products from rod making, cultivation and processing to sales.